The latter part of my high school career was spent convincing a young man to be in love with me instead of hate me. I can still remember a mutual friend of ours telling us to play nice cause he was sick of us fighting and in order for him to have some peace we would have to “fake” it in the spirit of his friendship. So the game began, we “pretended” to be nice to one another in his company. We acted as if we liked each other, we joked and kidded around, we play fought and hugged and acted like on one hand we hated it and on the other loved it. I can still remember this tall dark-haired blue sneaker wearing kid saying to me “If you weren’t so hot I’d put a stake through your heart” not a very nice thing to say at all and in my twisted teenage brain, that statement meant he was flirting with me. And from that comment a relationship all of discovery ensued. I felt as if I could take care of him and watch out for him, not because he needed it, but because I so badly needed to be needed. He touched me like you would assume most high school guys did back then, not like now where they are already sleeping with their teachers and getting laid by fourteen, but gently and nervously and eagerly and I was enthralled by him. I felt connected to him on a deeper level and we talked and he listened and he heard me. Do you know what it’s like to be a teenage girl and feel like A) someone is listening to you and 2) that someone’s hearing you? It’s enough to make a girl wet her dainty teenage panties. If I had to go back and hindsight being 20/20 this was my “Guy that got away” There was/is still something about this man that makes me feel connected to him. When I see his beautiful wife post pictures of their gorgeous family it warms my heart. It really does, but I can’t help but think why wasn’t that me? Why couldn’t that have been me? I am happy he is happy and his wife is lovely and let’s be clear I’m not a home wrecker. I don’t date, hook up with or entertain married men. I want all marriages to succeed just as much as I wanted all of my marriages to succeed. Yea you heard me, marriage(s), plural. Needless to say when I was a senior in high school we broke up shortly before the prom. The scene still plays in my head as if it was yesterday; they were on the stairs together, they being he and another girl. A beautiful, funny, fun to be around girl. A girl I used to stare at in aw cause she was just that pretty and funny and smart. It appeared as if they had just kissed and they both looked like deer’s in headlights when they saw me turn the corner. They seemed shocked and I had a visceral reaction to the two of them together, never actually seeing anything but all three of us knew what was going on. She was in and I was out. A few days later she told me “We are going to the prom together” At that moment everything was in slow motion. You know what I’m talking about….when the entire world slows down at a pace your brain can barely comprehend and there is song cues and you feel like you’re starring in some late 1980’s chick flick where the camera zooms in on you as you decide to fall apart or keep going. I could feel my throat start to close and my hands start to sweat and all I could muster was “That’s awesome; you guys will have so much fun together.” What?! What kind of pathetic passive aggressive thing to say was that? Where was my rage, my fury, my quick-witted snake tongue when I needed it? And that’s when I knew I would forever play the role of Meg Ryan in You’ve got Mail, always wanting to say the thing I should say and never actually getting the chance to say it. On one hand it seems to be the noble thing to do, but what about me? What about how I was feeling? What about me communicating my hurt and disappointment at that very moment? They say communication is key. Key to what? Sometimes the moment to express ones self just isn’t right. Sometimes it’s better to keep your snake tongue at bay and be the bigger person. Don’t wait too long though, don’t let those moments pass by cause sometimes what needs to be said is exactly what needs to be heard. And then again….sometimes silence is the loudest voice you’ll have. 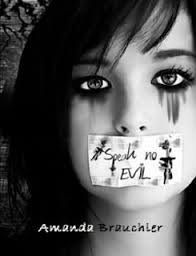 One thought on “Speak No Evil”