I guess over time when living with someone whether it’s a friend or love interest things begin to change.  That’s exactly what happened to Drama and I.  We operated symbiotically for a while and it worked really well, until it didn’t.  Seems to be the general theme of all relationships in my life, but this was different. This was supposed to be my friend, this was going to be the one guy that proved not every guy is the same.  He was supposed to show me that men and women can be friends, that a relationship between two people can be built on a foundation of friendship and that neither person would be looking for more.

I’m sure part of it was my fault as I got comfortable and used to him being around.  But when he wanted more and I couldn’t give it, things went to hell.  I am sure from his perspective I led him on, but really I thought I was up front most of the way.  We got close, maybe a little too close and it wasn’t what I wanted. For the first time in my life, ever, I knew what I wanted, what I needed and that was to be alone.  Really alone.  To get my house back, to get my life back.  To stop giving myself to those who didn’t deserve me.  Not that Drama didn’t deserve me, but I didn’t feel it.  I wanted so badly to feel it, but right now I wanted nothing more than to feel it with myself and not with someone else.

Have you ever had that feeling?  Like no matter what life was throwing at you or if you got asked out, you just wanted to be alone?  I had just gotten over Serendipity and now Drama wanted in on my life and I just wanted to be alone.  Like a college girl who is going home for the summer and wants to be nothing but single.  I didn’t want to hook up or date, I wanted purely to get myself together.  I know I have said it before, but I wasn’t in the same place now as I was then.  This was serious.  I felt the change in me, I knew it was time to focus only on where I wanted my life to go.  I didn’t want to be held accountable to anyone, I didn’t want to be responsible for anyone else.  I wanted solely to spend my time doing things I enjoyed, without worrying how it affected anyone else.

Some people would say that’s selfish and it is, but not in a bad way.  In order for me to ever be able to give of myself again I needed to replenish.  I needed to know who I was and what I was willing to do for another person.  I needed to be able to be whole, something I hadn’t ever really been able to say.  So I told this to Drama.  Being that he knew my story, he knew what I had gone through and all that I had endured, I thought for sure he would be understanding and supportive.  Instead, he was resentful, he was mean and he lashed out.  He called me more names than I’d been called since I was in 6th grade and had a fight with the school bully on the black top. I was shocked and hurt and he got under my last nerve.

We argued like cats and dogs screaming and yelling as he said things like “You are a manipulator, you use people and you are a bad friend.”  BAD FRIEND?? Really?  Weren’t you just living in my house for four months?  No good dead goes unpunished.  I thought for sure I was doing the right thing, the kind-hearted thing, the giving thing and now what I got in return was backlash.  I am not a user of people, I am not a manipulator of people and I certainly wasn’t a bad friend.  I don’t remember anyone else offering to help?  But here it was.  Everything I had tried to do to pay it forward, being thrown back in my face and now it would be time for him to leave.  Unfortunately, it’s not the way I wanted this friendship to end, but sometimes things happen out of your control.  And now things were out of control and I had to reel them back in.  I had to nest and covet and look inward.  Why on earth does this keep happening to me?  What is it that makes happiness with another human being so difficult for me?  This is what I would set out over the next few months to find out. 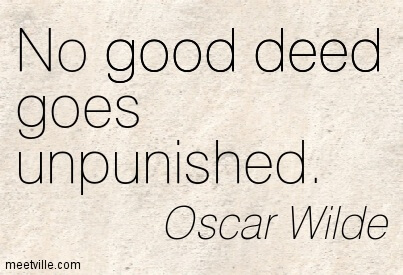