I didn’t sleep well, but today was a new day and new start and all that bullshit.  I work up early as we were supposed to make a day of the it, so I text him.  Remember the days before cell phones and social media and all this non-confrontational, miscommunication applications were around.  Where having a tough conversation meant picking up the phone, or not?  When there was no need to see where someone was or what they were doing or who they were with because either you called them or were with them and other than that everything came to you via a friend who had seen them out and about?  I’m not sure what’s worse; never being able to know what the other person is up to, or knowing too much and having it hurt either way.  Well, I was just as guilty as everyone else in our day and age and so I text him. “Would you still like to join me today for the show?” That was my olive branch.  Which got broken in two with one fell swoop, well text, but you know what I mean.

His response was “Those tickets are for you and you should take someone else so you can enjoy them.”  Huh?  I’m not taking anyone else, we had been planning this for almost a month!  “If you’re not going with me, I’m not going. If you would like to talk about this we can either meet out or I can come by you.”  I hate having serious heart to heart conversations of any importance via text or email.  You need to look into a person’s eyes, you need to see their soul and understand their tone of voice.  All of that gets lost with all other forms of communication.  He agreed to meet so we could “talk” and so I got myself together and headed up to his house.  When I arrived he was dressed in gym shorts and a t-shirt and was already obviously agitated.  WHY ARE YOU STILL MAD is what I wanted to scream at him, but I sat on the bar stool across from him and waited before speaking.

We went back and forth and back and forth and I began to cry because I was so frustrated and because I wanted nothing more than to make this anger stop and get back to loving each other when the words came out of his mouth they knocked the wind right out of me; “I’m not sure I can do this.”  They hung in the air, thick and heavy as I gasped for breath.  The words hit me like the stinging of the cold on a winter’s day.  The way the icy air stings your lungs as it goes in through your nose and out through your mouth.  They crept into my body the way ice water does on a hot summer’s day.  You feel it go down your throat and into your chest then through your arms and instantly you are cooled off, but for me this was not refreshing in the least.  I think I stutter stepped and fumbled on my words for a moment which doesn’t happen often as I am usually never at a loss for words, but my tongue was frozen.  I starred blankly as he starred back at me totally confident in what he had just said but bewildered I think at my hesitation.

I got out of my chair and walked over towards him and reminded myself not to miss this moment, not to worry about being vulnerable or rejection, but to speak from my heart as that is the only truth I know.  Then the words came out of my mouth and I’m not even sure I could hear what I was saying because my heart was beating so loud in my chest and I was so scared. “If you can’t do THIS, then you can’t do it, but I’m not sure what THIS is that you are talking about.  We have had 3 disagreements in almost 4 months and for me I’d say that’s as close to perfect as a couple could get.  We will get better at this as we learn about each other, we will not make the same mistakes over and over and upset each other.  We will learn to trust in each other and talk from a place of fixing things instead of a place of resentment and anger.  I love you.  I really do, from the bottom of my heart.  I can tell you if you just take a breath, everything will be ok.  Trust me.  Trust us.  I’m not like anyone you’ve ever met and I’m not someone who walks away unless pushed away.  So if you really want me to go you are going to have to say so, otherwise, I plan on loving you forever, no matter what gets in our way.”

I was shaking although I was pretty sure I wasn’t showing it.  I again took a long, slow breath in and held it while I waited for the other shoe to drop, for him to just give up, for him to not fight through it and make it work.  I held my breath that he believed in us as much as I did and wasn’t going to throw us away because he was scared.  I held my breath that he was just as in love with me as I was with him and that he would not, could not give up on us and let us go.  That even if he tried it would kill him inside and he would not be able to live without the love that we were building.  I held my breath so long as I waited for him to speak that I now believe I could be a deep sea diver or possibly a Navy Seal. He laid his head on my stomach as he pulled me close and said “I didn’t mean it….I don’t want to lose you.” And I believed him. And THAT, that is what NOT missing a moment looks like.  So take it, take the moment, hold your breath and dive in. 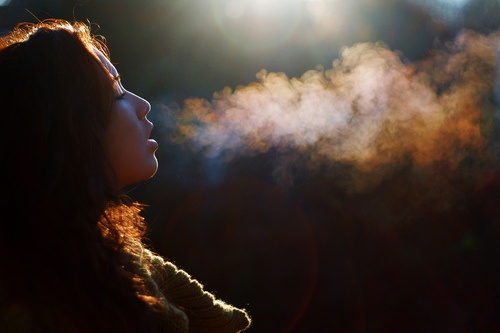