I hated that the next day I had to go back to work. One because I had had such a great time and two because I knew the next few days were going to be rough. Everyone had put the death of their beloved family member to the side, even though it was always there it wasn’t something anyone was focusing on being it was the holiday. But now everyone had left and the rest of the family would now mourn the loss of their loved one. I wished I could have taken the time off to be there for Dimples, but I knew there was nothing else I could do. I went back to work and would leave a little early in time to make it to the wake. I worked a full day and when it started to get towards the end of the day I pulled myself together and was on my way.

I stopped at home to get my children and to meet up with my parents. We followed each other over to the wake and unfortunately this would be the first meeting of our parents. Not the best circumstance, but I was hoping it would make a statement of how much not only that I cared about Dimples, but that he was now a part of my family as well. And that my family being there for him would mean something. We walked in and I did the introductions and we hugged and kissed and found ourselves a seat. My kids and parents only stayed a short while, but it was enough for Dimples to know he was loved an cared for by his family, me and my family. They made their way to say goodbye and I stayed to stand by his side.

I met family member after family member and friends and co-workers. Then as I turned around out of the corner of my eye I saw a woman that was beautiful. She was tall and thin and dressed impeccably. She had long wavy brown hair, she carried herself with grace and ease as she approached Dimples and gave him a kiss and a hug. I was a little taken off guard when she put out her hand and said “Hi, I’m Slim, nice to meet you.” She was poised and seemed uber confident and for a split second I felt off kilter. That was the mother of Dimples’ child, his ex, in the flesh. I regained my composure, stuck out my hand and said “Nice to meet you.” She wasn’t brash or harsh, but on the quiet side and definitely sophisticated. I was a bit in awe of her. Not only because she was so put together, but because for a split second I thought she reminded me of someone. That someone, was me.

The exchange took all of four seconds and then she was on her way through the rest of the room hugging and kissing family and friends. It was strange for me at that moment. The old and the new in the same room. I guess of course she would be there, but it didn’t dawn on me really that I would meet her like that. I hoped I didn’t seem awkward or rude. I’d hoped at that moment she liked me. Isn’t that pathetic? I was there by his side, with his family, being the doting girlfriend and in a split second my insecurities rose to the surface and I felt less than. I’m not exactly sure why, she didn’t do anything to make me feel that way, it was my issue. One that at that moment was insignificant in the big picture, one that I would have to deal with at another time, one that I may actually not deal with at all unless totally and utterly necessary. I suppose one I should be paying respects too and finding a way to say farewell. It was as good a time as any. 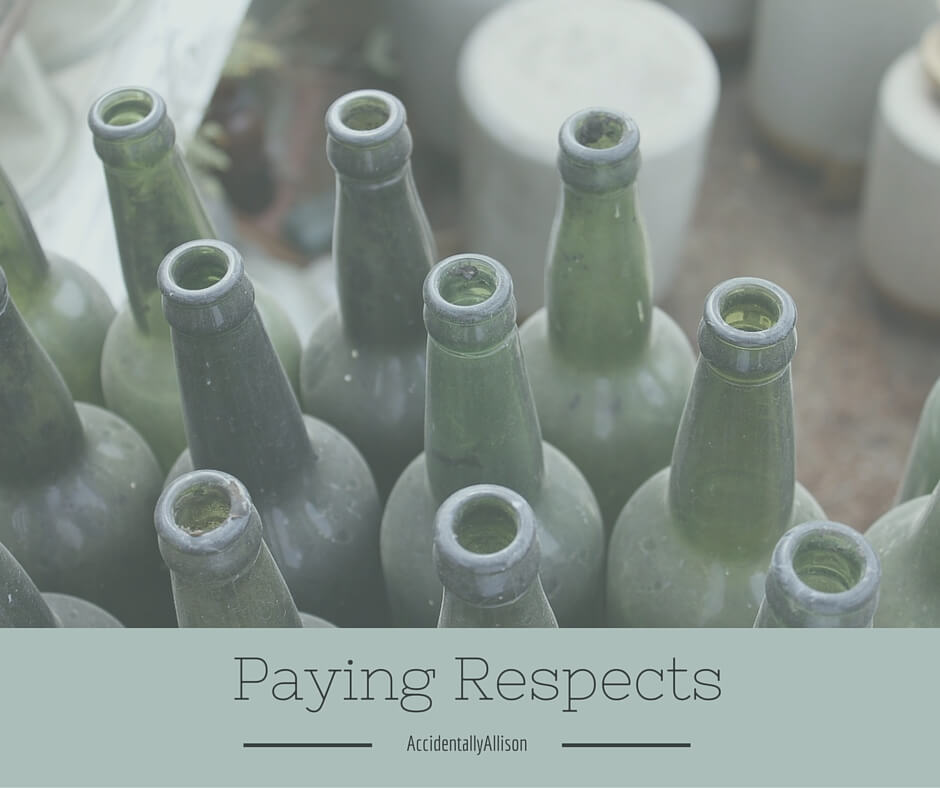