No one ever puts in a personal ad, Seeking Extremely Committed Long-Distance Relationship. I would think you should be committed yourself if you A) Placed the ad or 2) Responded to said ad. Being in a relationship is challenging enough within close proximity so adding any type of distance can certainly add fuel to the fire. You see the movies of couples reuniting after being away from each other and it looks so magical. They run into each other’s arms and cannot let go. They kiss for what seems like an eternity. Oh the romanticism! If it happens like that all the time, things must be so wonderful and loving. You are thinking, where do I sign up? I can handle that. Be careful what you wish for!

I can attest to the above as I was in two long distance relationships in my dating career. My first was with my future ex-fiancé. We met in the summer of 1996 when I first turned 21 in the lovely Heights of Seaside in NJ. She was an alum of Springfield College and I just happened to be attending Springfield at the time. The stars were in alignment! It was almost as if Sandy and Danny were singing “Summer Nights” to us from the start. Fast forward to the end of the summer and we decided to make a go of it. She was flying back to Tallahassee to finish grad school and I was driving back to Springfield, MA to return to my undergrad work. This was before cell phones and text messages if you can even picture the horror! I was relegated to hours on the phone, a few cards here and there as well as eagerly awaiting emails at the computer lab! We both flew to each other when time and finances allowed or when we saw each other back at home for the holidays.

When you are in a long distance relationship, time is so precious. You can’t afford to waste it on nonsense, fighting and bickering over insignificant things. We both secretly ran our internal clocks and wished it wouldn’t go so fast because for us, we had a weekend, maybe 72 hours at most. Let’s not forget about traveling for food or eating, quality time spent and sleeping. I don’t care what Mick Jagger sang but time is not on your side. Yes, we ran to each other and gave each other the best hugs. Every kiss was savored, every romantic or intimate gesture felt magnified by 100%! You make the most of it until you have to leave each other again. What they don’t tell you is that the hours leading up to it carry an unspoken pain in your heart and you feel like a part of you is being ripped from you very soon. That is the “romantic” part of the journey.

Let’s talk shop about the honest and real struggles that accompany you when you decide to make it work. As Sandy said, “Tell me about it…stud!” You asked and now you shall receive. LDR number two was years later. I met a girl at a Bon Jovi concert at Giants Stadium. She had driven down from Massachusetts with her brother and friends to see the concert because she was a huge fan. They tailgated with us and ironically enough, we both had tickets again for the next night. I asked my friend to get her number for me because for whatever reason, we just clicked. I thought she was born to be my baby. We spoke every night for hours on the phone and developed a friendship and even a love before I even visited her. About two months in, I drove the four hours to see her and after a few minutes of awkwardness upon arrival, we picked up where we left off the last time even though it was our first. This was far easier to manage as it was a car ride away. We dated for almost three years and we definitely had our share of laughs, immense love and intense relations.

However, the time in between was not always coming up like a bed of roses. In fact, the thorns were starting to make themselves known! Eventually, time apart began to erode the bond that we had that I thought was impenetrable. We fought over who came to each other more. We fought over having to go bed after being on the phone for hours and the sun was coming up any minute. We fought about our future and who was “supposed” to make the sacrifice and move to the other. We fought over who had the better job and where our careers were going. Needless to say we went out in a blaze of glory.

Long distance relationships are not for the faint or weak of heart. It can be so exhilarating but can be equal part emotionally draining. You have to be committed to being in a commitment. It’s a simple and as complex as that. There definitely is no rule book because each situation is different and each set of securities or lack thereof is different. Give it serious thought but if they are worth it and you feel like you cannot live without them, then tell her “I’d Die For You” before it turns colder and that’s how it ends…

As if being in a relationship isn’t hard enough, one could add a layer of even more depth by making it a long distance relationship.  There are times when this can’t be avoided; the armed forces, an airplane stewardess, an astronaut or maybe even a rock star.  For the lay person, adding this layer can only prove to make a difficult thing even harder.  Relationships take time, the take work and they take connection.  This connection can most likely be fostered by being together.  Experiencing each other in a way that distance would only make nearly impossible. The touch of another person, the hand holding, the kissing can’t be done from afar.

I know that I may not be capable of having a relationship that  had distance between us.  I need much more attention that that can offer and I’m not sure that I would be able to feel the connection from another with just letters, texts and face time.  I would want their arms around me, their lips on mine and be able to touch them or kiss them whenever I wanted.  Don’t get me wrong, it can work and does work for many people.  The amount of trust and security that has to be in a relationship like that seems almost unfathomable to me.  To be able to know that the person you want to be with is so far away and is true to you.  How do you know though?  You can’t look in their eyes and see if they are telling you the truth.  You can’t feel their presence and know that the feeling is real.

Now I don’t even like being away from my significant other for a few days at a time, let alone thinking they could live in an entirely different state.  I’m not sure I would be strong enough for that.  I need to know they are there for me, if something happens and I needed them.  Not on an occasional weekend every few months  sort of thing.  I want that person close to me, I want them in my life on an every day basis.  It’s the every day that makes you get to know someone, that helps you understand if you can make it or not.  Its the every day where the details lie of being in a relationship.  The mundane, the monotony of normal every day life that brings you together, that connects two people together.  Aside from the tactile aspect of a relationship, the togetherness that being in each other’s life physically is something that is unmatched.  I know that having my man by my side in good times and in bad is something I could never  give up.  No matter how important the distance was. 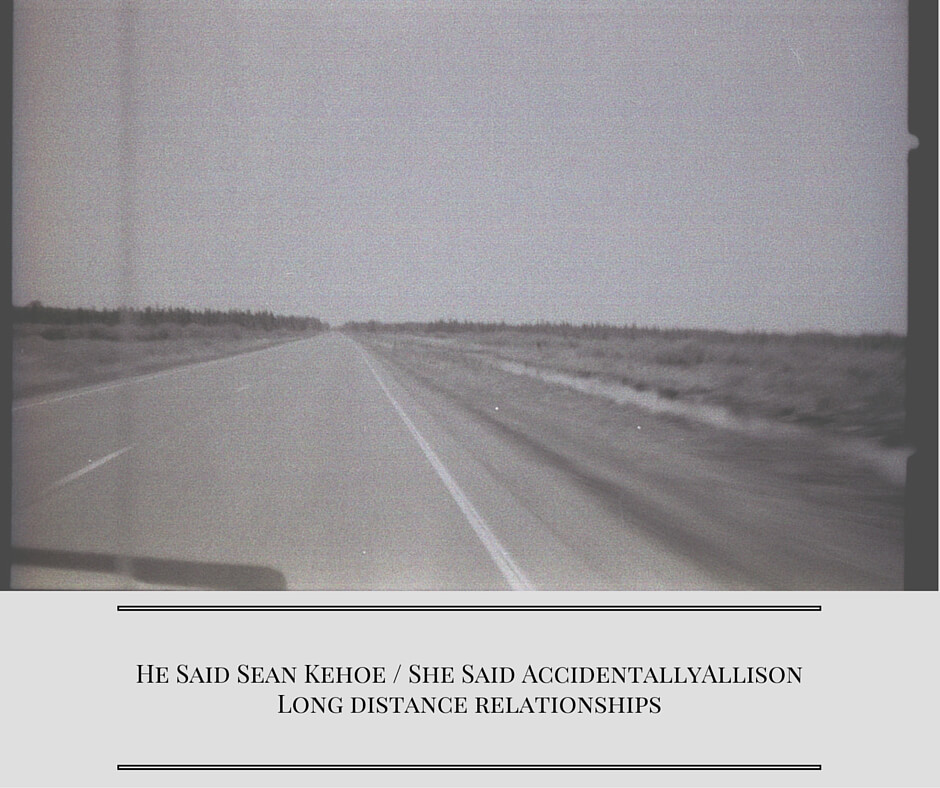 3 thoughts on “He Said / She Said – Long Distance Relationships”