For more years than I can remember I have always been an outspoken, in your face, speak my mind, live right at the line kind of girl. Then I turned into an assertive (not aggressive cause that sounds bad), stubborn, outspoken, in your face, always on he verge of inappropriate kind of woman. Most people never get to see my softer side. Most people don’t even believe I have a softer side. I have built up walls like a fortress and that wall I thought kept people out. I had spent so many years being told I was too much of something or not enough of something else. I was so afraid to just be me, that the walls went up and anyone who was really and truly interested in getting to know me, was going to have to do a hell of a lot of work in order to get over that wall. I’d love to say that the walls come down but that would be a lie. The walls always stay up, you are either on the inside with me or on the outside. There really is no in-between.

It wasn’t until I was in my forties did I realize that I no longer had to be afraid of who I was. That I was, who I was, was in fact; good enough. Whether it was too much for someone else or not enough for another, it was just right for me. Kind of like Goldie Locks; just right. I don’t know how to be anyone but me. And I have found out that being me is an experience I kind of wish other’s could partake in. The things that go through my mind, the thoughts and dreams and amount of information kept in this tiny little brain of mine could move mountains. I have been told by many a person that I am not like anyone else. I know that and you know that, but it’s still strange to hear. What does that mean? Should I become more like other people? That doesn’t sound like much fun. About ten years ago I realized I have a face that people think they recognize. They stare, do double takes and even sometimes approach me and say hello or good to see you or nice to meet you as if I am somebody. I happened just last night at a restaurant, when someone came up to me and gave me a hug and a kiss and said “s to see you.” I had never laid eyes on that person.

I was in a deli once waiting on with my oldest daughter who was about ten at the time. I noticed for years people staring at me and I’m not saying it because I’m conceited I’m saying it cause it happens all the time. My daughter looked up at me and said “Mom, why is everyone looking at you?” All I could tell her was that it happened to me all the time and maybe they think they know me. It used to make me uncomfortable. Scared to be approached by someone or looked at in a way that made me feel weird. Now I know it’s just part of being the extraordinary creature I am. I am me. No more, no less. A woman at a clothing store once was starring at me when she said “You have an amazing aura and people are drawn to you, don’t ever let them dull your shine.” What the heck is that?! Those are the kinds of things that make me realize that being different was something pretty freaking cool. I will no longer be afraid of who I am. I will not dull myself down in order to make other’s comfortable with me. I am comfortable with me. Now that doesn’t mean I don’t have insecurities like everyone else, but the core being of my soul is at peace because I know who I am. And I think every day, I get better at being me.

Those walls that have been built over the last forty years are a farce. They don’t keep people out….they have boxed me in. People should not have to work so hard to be close to me, to see my softer side, to know the real me. Time to no longer let other’s dictate who I will be, how far I will go and if my worth is enough. I know it. I hope you start today. That you no longer allow fear to hold you back from being the amazing human being that you are. We are all unique, we are all afraid of something, my wish is that you aren’t afraid of yourself like I was. And that you never let anyone dull your shine. 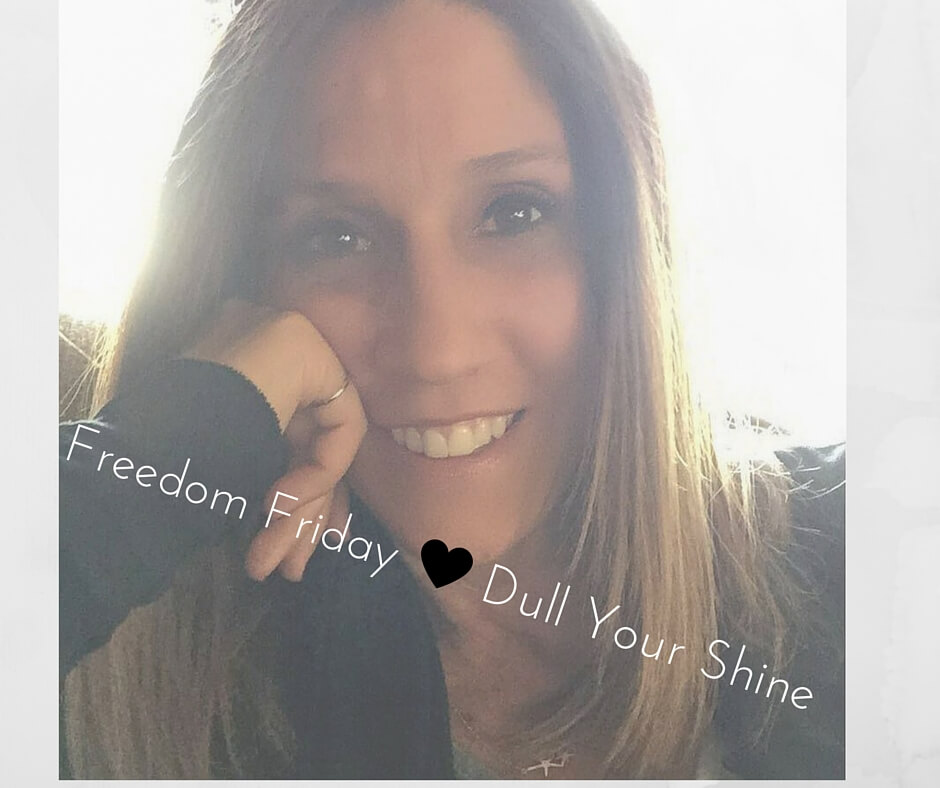