“Tiny bubbles (in my belly), Tiny bubbles (may be smelly)”…Don Ho wrote a song similar to this but his Tiny Bubbles was a major hit. My tiny bubbles…not so much. So let’s discuss that rotten cloud that looms over every relationship, farting! Men and women definitely have different views on this somewhat taboo topic. When beginning a relationship, men ideally try and hold in not only their real feelings but their feelings of pain and discomfort of not being able to release what comes so natural any other time of the day. Gas bubbles build and build until we want to burst. Any wrong move could result in an embarrassing situation that neither is ready to deal with yet.

In most of my relationships, I would try to hold off as long as possible until I had to burst. And then as Popeye says, “That’s all I can stand and I can’t stands no more!” We have the “talk” and I can assure you it’s a quick one. I explain that every night when I get in my car after I see them, I have so much gas built up from holding it in for hours and it’s just painful. I have to start letting it out. Once that green light has been given, the world just seems right again. I can go back to being a man and we are officially became that much closer. It’s a rite of passage for all couples because it is an exercise of trust and comfort. Only one time in my dating career did the woman not only fart but burped like a champion! Talk about easy and painless. She actually burped so loud, I’m convinced she set off the car alarm in front of us (I have living witnesses to prove it!). Whether we like to talk about or admit it, farting is a natural occurrence; a necessary evil. So before there is truly something rotten in Denmark, make sure you don’t ignore that gut feeling and have the conversation about passing wind before someone passes judgment.

I believe there should be some things left to mystery in a relationship; farting is one of them. It’s like going to the bathroom with the door open, who wants to see that? We all do it, we all know we all do it, but still there should be some things that are left to the imagination. I would like to think that my significant other doesn’t know that I pass gas. In public, at work, in the car, in bed, basically everywhere and anywhere, but I don’t need a full parade for it to happen. I would highly suggest you make sure your relationship is in a very secure place before letting one rip!

Sometimes it’s inevitable. It slips out without warning. You think it’s going to be one of the silent ones, you think there’s no way it will smell, then all of a sudden TOOT and there it is, last night’s broccoli now sitting in the air waving it’s hand at you with vigor and excitement. Embarrassed? Of course. Do your cheeks flush red and a wave of heat come over you as you look around to see what could have made that sound? A resounding YES. However, it was you or him or both. There is a time and a place for farting I think. I’m not sure when or where that is exactly, but I would say it’s definitely not in the first three months of your relationship.

I think farting or passing gas is a hilarious pass time for men. They don’t seem to get embarrassed or feel uncomfortable, they seem to act as if it’s a right of passage. Like once they do it in front of you, there’s no end in sight. Once it’s been released into the atmosphere, into your relationship, it will come again. And again. And again. And they won’t feel bad or weird. They will laugh it off and yell things like “Did you hear that?” And “Wow, that was a loud one!” There will be threats of them doing it on you and under the covers and there will be no shame. It is just one of those things that once it happens, there’s no turning back. 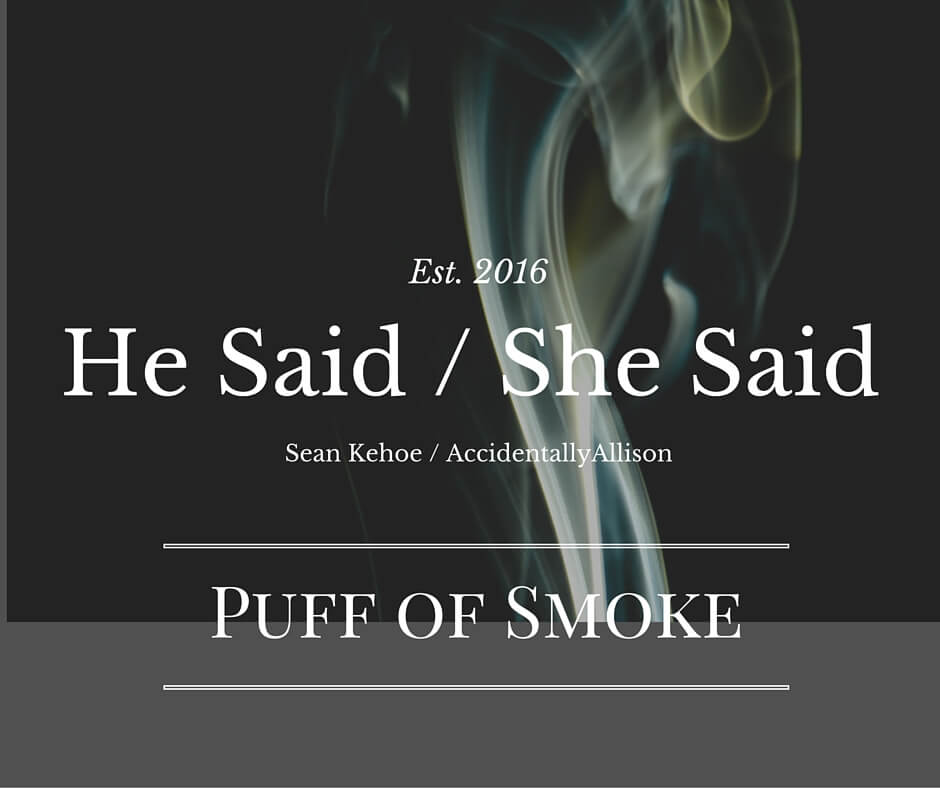 One thought on “He Said / She Said – Puff of Smoke”