All is fair in love and war. Famous words to live and die by. Love can be war and sometimes all you can hope to do is survive with a tie. Unless you are a male, then just expect that you will probably lose even though you are so sure that you have it won.

Our brains are technically the same in that we all have one but our chemical make-up determines if we operate logistically or like a lunatic. When in the fight or flight mode of a good fight, common sense and rationale typically do not apply here. Our mouths spit fire and venom before our processing center even has a chance to catch up and like my father-in-law always says, “Words are like bullets and you can’t un-fire a gun.”

Sometimes the arguing is calculating and we re-release past transgressions in order to try and hurt the other person and make them feel small. Double Jeopardy states that you cannot be tried for the same charges in the same case. So if you have paid your dues for any violation, it becomes irrelevant. In fighting however, something you did four years ago somehow becomes valid to a completely contradictory set of circumstances. But is that really fair?

Unless two people are stubborn as can be, someone will usually cave and apologize, agree to disagree or just throw up the white flag and say, “You were right”. No one likes to lose a fight, no matter how big or insignificant it may be and admitting that you were at fault for starting said fight or just plain wrong is a blow to anyone’s ego. We all secretly tally our wins and losses even though we like to think we don’t keep track and keep telling our significant other once it’s done, it’s done.

Eleanor Roosevelt said that no one can make you inferior without your consent. While that is certainly true and if you are innocent, it is easier said than done to not internalize or take offense to what is being said towards us. Conversely, why is it that we have an opportunity to choose our words carefully but those words are chosen with the end result being a direct hit?

The only real fair fight is the one where the facts of what is current are being discussed. If you made a wrong turn that caused you to be late, that is the only thing that is relevant. If your partner added fuel to the fire by attacking your character, that should be thrown out immediately. That is not fair and is uncalled for. If you responded to your wrong turn by insulting your partner, that too is out of line. Stick to the here and now. Remember, you may win or lose a fight but you never want to do it at the cost of someone else’s respect.

I have always believed that arguing in a relationship should have a certain set of rules. Well, not always, but in my latter years I have. There should be a form of respect that is understood between two people. You are entitled to how you feel and to get angry, but always remember that anger is a secondary emotion. It masks what is really the issue, whether you feel you’ve been wronged, disrespected, your feelings have been hurt, anger is what appears and the best way to release that is to communicate. Easier said than done.

I hate swearing in an argument. Not the occasional drop of the F bomb about something, but personally at someone. Calling names, belittling, demeaning, making someone feel badly instead of expressing yourself in a way that the other person understands you and the behavior, whatever it may be can be changed or curtailed the next time the situation arise. I learned a long time ago that I can use my words as weapons to make others feel bad, but that didn’t get me anywhere. What I wanted was to be heard, to be understood, to be listened to where my feelings would be acknowledged and considered.

What is your list of rule for fighting fair? Do you have one? If you don’t, you should. It’s just like any other form of communication, maybe the most important. If we can find ways to tell someone how we feel without putting them off we are more likely to get what we want out of it. And really, isn’t what we want is for our significant other to know how we feel and not do the things that make us feel bad? I’m pretty sure that’s my goal. 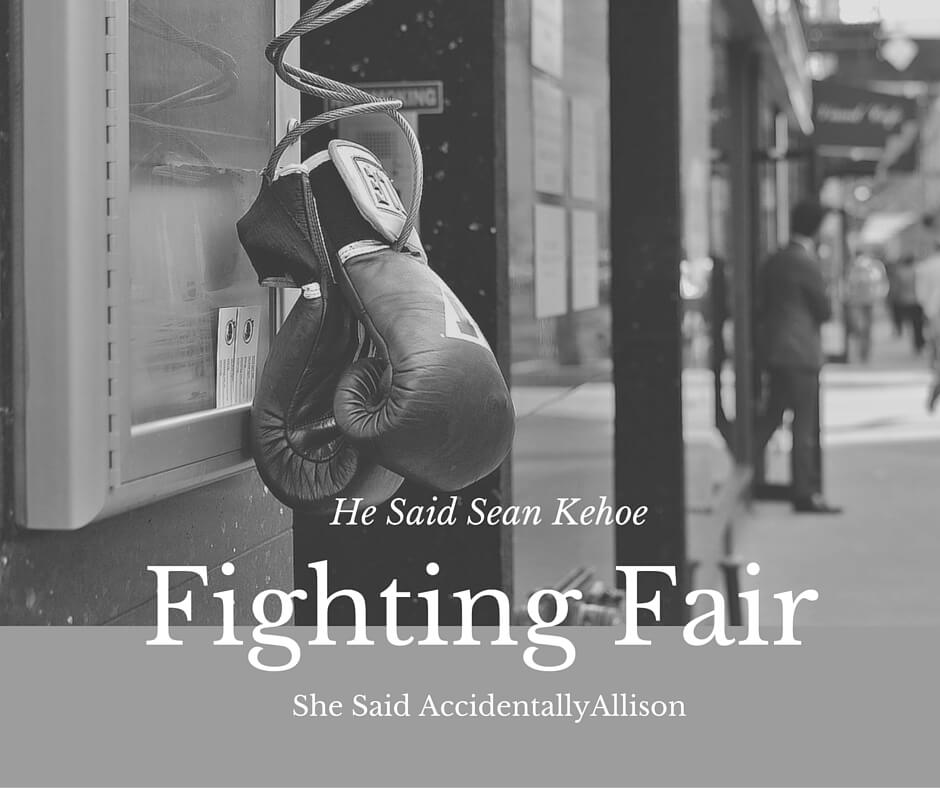