So happy to be up on RAWrWORDS today.  Check out the article HERE

It had been some time since we had spoken to each other. We lived in silence day in and day out. Maneuvering around each other like an exquisite ballet orchestrated by the masters as we weaved in and out of each other’s space.

It’s odd when the person you once loved, becomes the stranger you are now living with.

It had been weeks if not months of him sleeping on the couch, coming into the house late at night and whispering on the phone at all hours. It was as if we were living separate lives. Not intertwined at all, and yet with every move the palpable pulse of our dying marriage in front of us.

I knew for some time that he was having an affair, but I refused to let myself believe it. I knew in the depths of my soul that this man I had given my life to was now giving his to someone else. I didn’t know who it was or where they lived or what her name was. She was like a ghost no one could see, but everyone knew existed. She could make the hairs on the back of my neck stand up without even knowing it. She became a part of my everyday life. I spent hours thinking about her, wondering who she was and if the vision I had of her would become real. Then one day I saw it….

In the bottom of the dryer there it was, staring up at me with all the truth and honesty in which I didn’t want to see. I picked it up ever so carefully as if I may break it or if it wasn’t real. Like if I touched it too hard or went for it too fast it may disappear from reality. I looked at this tiny rose stud earring and realized that my life was changed forever.

The significance of that earring and how it was now the basis on the demise of my marriage. Of all I thought was holy and sacred. Of the vows, I took in front of God, my family and my friends. It was all a lie, and this tiny red rose stud was now the only proof I had that I was once in love, and now it was over. The infidelity had crept into my life, and there was no going back.

I saw the rose stud earring for the first time in January 1999. I did nothing with it at the time. I didn’t bring it up to anyone. I never told my parents or my best friend or even him that I had it. It sat in my jewelry box, and I was the only one that knew it was there.

The rose stud earring and I were the only two that knew it existed.

I’m sure his mistress knew it existed, and that is where our lives eventually intersected, but at the time it was my dirty little secret. My leverage, my proof. At the time, that’s what I needed; proof. Like wanting to believe in Santa Clause or the Tooth Fairy or Ghosts, sometimes even though we know something is real, we still need tangible proof.

It has been sixteen years since I first saw that rose stud earring and it now sits in my jewelry box on my dresser in my bedroom. Sometimes I take it out and remind myself that life can change in an instant. It now is the last thing of value from my marriage. It is the proof that I was once married. It is the testimony she existed and not a figment of my imagination. It was proof that for some of us; monsters do exist. 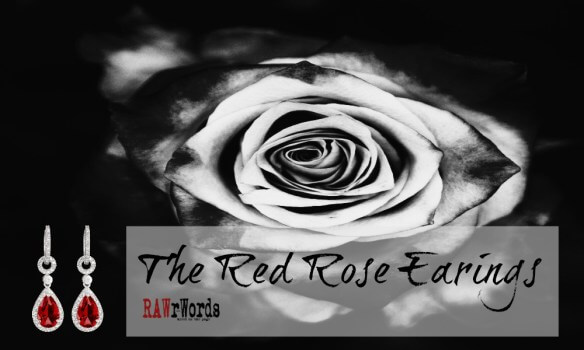 2 thoughts on “The Red Rose Earring”