A the end of that very stressful dinner party all the attendee’s exchanged phone numbers. I am pretty sure it was a ploy for the guy who came with the Pilot to get my number, but so be it. All the ladies exchanged numbers and we left it at that. About a week or so later a friend of mine was hosting a Wine Party. I’m not really sure what that means, being every time we get together I would consider it a wine party, but this time someone was going to teach us about the wine we were drinking. So all the ladies, the Pilot and the friend attended this event. We all met at my house for a pre wine party glass of wine and chit chatted for a bit. I thought the friend would be perfectly suited for one of my girlfriends and so I set it up that she knew he was coming and that he was handsome, educated, had a good job and could hang with a bunch of chicks with no problem. I thought they’d get a long swimmingly.

The party was fun and after a few different wines, some more chit-chat it was time to leave. Some of the ladies were going to join me back at my house for an after wine party glass of wine and I invited the friend to come too. Unfortunately at the last-minute I had to go pick up my daughter and when I returned the friend was leaving. I asked why he had to go so soon and he said he was tired. Tired? Really? I mean, we had probably had sixty-two glasses of wine and it was getting late, but what I found interesting was that I was the one a little disappointed that he left. I went inside and asked my girlfriend what she thought and she was not as interested in him as I had hoped she’d be. Then she said “What about you?” Hmmm…what about me? “What do you mean?” I asked her. “Why isn’t he for you?” It hadn’t really dawned on me. Why not him? Why not me? I guess it was possible right? Why. Not. Me?

What do they call that? The occurrence and development of events by chance in a happy or beneficial way. Serendipity? Could it be? A by chance meeting that ends up being THE guy? Come on, that only happens in the movies right? Well another week went by and the ladies and I were having wine one afternoon when we started texting everyone from the dinner party to come over and join us. I text serendipity and told him to come over. Instantly the phone rang and he said he was out with a friend and they were Christmas shopping and why didn’t the girls and I meet them out later. Later? We wanted to hang out now! His friend got on the phone and they insisted we meet to go out dancing so with a little convincing, the ladies and I agreed.

We all went home, got ourselves together and met at my house. We were dressed to the nine and ready for some fun. I called to let Serendipity know we were on our way. No answer. I text when we were halfway there, no answer. I called again once we were in the parking lot and said this “You better not be passed out on your friends couch now that I am dressed up with lip gloss on. Get up, And get here!” I suppose I was flirting, but then again I feel like I talked to all men this way. Assertive as opposed to aggressive. They arrived shortly after us and seemed geared up and also ready for fun.

We danced and drank the night away and at some point I walked up to him and asked “So I hear you were asking about me?” His response was flat “Yea?” “Yea” I said. “So? he asked. “Why?” I asked. And without skipping a beat he says “Because I like you.” And with that he leaned in to kiss me. I put the palm of my hand straight across his whole face before his kips could touch mine and said “Are you sure you want the fist time you kiss me to be drunken in a bar?” He smiled sheepishly with those pearly whites, flipped back his hair almost in slow motion like those old school videos and took a step back. I stood firm, smiling back at him and there it was…..Serendipity. 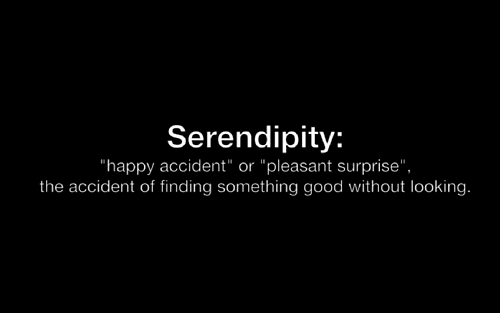