I could feel a plan percolating, but I went through the weekend and didn’t think about it too much. Then, Monday morning at work, Serendipity’s mother instant messaged me asking if I was coming to visit. I had to tell her there was no way I could swing it. She seemed genuinely disappointed and no one wants to disappoint anyone, but especially the mother of the man you’re dating. So we talked for a bit and here and there she threw in that flights weren’t so expensive right now and lines like “He would love to see you and I would love to meet you” I am run by guilt as we all know and when I got off of IM with her I began my search.

I looked at all kinds of flights here and there with this airline and that airline, but nothing seemed to fit my ever decreasing budget. I remembered that I had miles leftover from my trips to China and thought maybe I could use them for a one way ticket?? It was possible I guess. So I investigated further. I didn’t even know what I was doing. What, I was just going to show up in the land of sunshine on his vacation? Surprise! Here I am!!! Do people even really do this? All I could hear in my head was “If you want something different, you have to do something different” Well, getting on a plane and showing this man how much he meant to me was definitely different. So the search continued.

It was two days before New Year’s Eve and again the mother popped in with questions about visiting. Ok! Ok! I pulled the trigger. I scheduled my miles for an outbound flight the morning of New Year’s Eve. I scheduled my return flight basically with money I didn’t have but it was too late, things were in motion. The mother helped me make all the arrangements and the plan was this – I would show up and surprise him on New Year’s Eve. WHAT?! I was so nervous, I couldn’t believe what I was doing. I spoke with my boss and he gave me a few days off, I got the kids taken care of and then it was upon me. The surprise of all surprises for me to pull off.

My girlfriend drove me to the airport the morning of the 31st and I was all dressed up. I got on line to board the plane and there were tons of people waiting. The line was long and a little girl was standing in front of me. I asked her where she was going and she told me. “I’m going to see my grandma.” Then she smiles and the line giggled a bit cause she was so cute and she asked me where I was going. “I’m going to surprise a boy on New Year’s Eve to let him know how much I like him” She looked at me for a minute and then the mom said “You’re getting on a plane and surprising a guy on New Year’s Eve?” “Yes” I answered and then I thought how ridiculous this sounded. The next thing I knew the entire line was talking about my surprise and how it sounded just like a movie!

I had treated myself to a first class ticket with the miles on the way there and sat down to a cocktail off the bat. The whole first class was maybe 6 seats and the entire time, I spoke of my story with Serendipity. How we met, how I was falling in love with him and how today, on New Year’s Eve I would arrive in the land of sand and sun and surprise him. That I would stand at the door and watch him most likely have a heart attack with me there and that we would say goodbye to this terrible year I had and say hello to all the possibilities in the world. As we got off the plane, people began to cheer and clap and wish me luck. I got four cell phone numbers from that plane ride because they needed to know how the story ended. Was he happy? Was he shocked?

I got off the plane with well wishes and good lucks and looked for my driver. He helped me into the car with my bags and we discussed the surprise plan. He knew he had to film the entire thing and was very funny and helpful. Until he said “I’ve done two surprises like this before, one was beautiful, the other…..didn’t turn out so well. Hopefully you will be one of the good ones” I gulped hard and started to feel my stomach drop as time was ticking and it was getting close to THAT moment. I instantly felt sick. What if he wasn’t happy I was there? 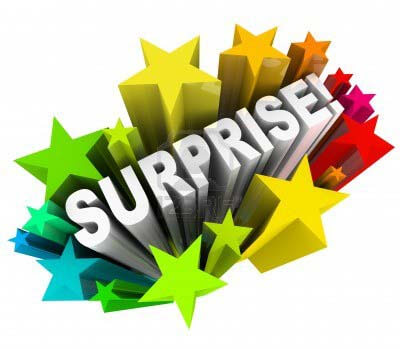