I was finding it hard to wrap my head around the fact that just a few short weeks ago I was living a blissful existence with a man I had thought was THE guy.  Not just thought it, but felt it, in my bones.  I was wrestling with the fact that Serendipity may end up in actuality, NOT being THE guy.  And alas, it would be time for me to move on in life alone.  However, I wasn’t going to give up that easily. I would give it a few more weeks and maybe I could hold off, hold out, until this work thing lightened up and then maybe everything would return to normal.  Except I kept thinking, even if it does return to normal a few things had now happened that seemed to have changed the entire dynamic of who we were.

First off, the darkness that seemed to lie within him.  A sadness that ran deep and was not being addressed.  I wasn’t sure that if it was something that was just lying in wait to rear it’s head again since it wasn’t being fixed if that was something I could live with on an everyday basis.  See that’s the thing…..when you finally decide to change yourself, your point of reference, your perspective and see the world as a beautiful and remarkable place full of opportunity and abundance, you almost find being with anyone who is negative unbearable.  That was what was secretly happening to me.  I was resenting the constant downward trend of Serendipity’s attitude towards life and my supportiveness was beginning to wane.  It was noticeable too.  I was no longer asking how he slept or how work was.  I didn’t care, because I knew it was going to be a laundry list of how awful life is and I wasn’t entertaining it anymore.

Second thing was that how was I going to actually be ok with a few months out of every year being thrown away like last night’s garbage.  That my needs, wants, goals, whatever would be ignored because whatever he was going through or working on or dealing with would be higher on his list.  I don’t even think I made the list during these two months. He had time for work, dinner with his boss and phone calls with his mother.  Honestly I get the phone calls with your mother, it’s your mother, but really?  No time for me, no time to see my smiling face or hear my silly laugh or watch my ass walk around your house.  No time?  None?  Nada?  I didn’t think it was something I was going to be able to deal with on an every few month basis.  And I was getting sick and tired of everyone making excuses for his poor choices in priorities. I mean honestly, I was a single mother of two, just brought myself back from being penniless and homeless, worked a full-time corporate job and had aspirations of being a writer….I WAS BUSY TOO and still had LOTS of time to see him or have sex or eat dinner!

So I would give it one more college try.  I would give him the benefit of the doubt and an opportunity for him to show me, not tell me, how he felt about me. It shouldn’t be hard to do.  What I have learned is that in relationships, yes we compromise but most people end up not doing what they don’t want to do.  So if you want to see me, see me.  If you want to be with me, be with me.  It isn’t rocket science and it shouldn’t be a whole big to do every time I want to get together.  I am your GIRLFRIEND and with that I would think you would WANT to see me.  I don’t mind coming second to a few things and even having things shift as life gets crazy, but to go days, weeks without seeing each other and you’re not in the Armed Service overseas somewhere is weird.  So I would give it one more college try!  You know how I hate the word try right? 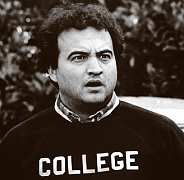