I could barely stand the suspense at this point. We walked into the restaurant, sat down at a table and he could see I was eagerly awaiting what “news” he had to tell me. It appeared as if he was even avoiding eye contact with me. In my head I tried to stay calm, but every nerve ending was on high alert. I’d felt this feeling before. I’d felt the lump in my throat, the quiver in my stomach. It brought back a flood of emotions from the last text Jolly Guy sent me; “Get the Fuck out”. It was as if all those desperate, insecurities were tingling through my whole body and I really didn’t think it fair how he went about any of this. In the few second we sat there in silence waiting for the waiter to serve us water and open wine I began to get annoyed. My insecurities began to manifest into anger and I could feel I was on the verge of saying something nasty. So before he spoke, I thought I’d kick the conversation off and he wasn’t going to like what I was about to say.

“I am not technically sure when the last time you actually dated a woman or had a friend or even a relationship with a parent where it was ok to say “I have something to tell you” then say nothing for hours. It’s very unfair, it’s really kind of obnoxious and for future reference, if you ever do that to me again, I will get in my car, come to your job or your house and make you tell me right then and there. Your other option, as to not cause alarm, would have been to say nothing and then when we got here to dinner say something along the lines of “I’ve been thinking a lot and there are some things I need to tell you.” Make sense?” I didn’t even want an answer I was now sweating and I could barely stand myself. He responded with “I get it, I’m sorry.” Fine now that I said my peace I was thinking what the hell was taking him so long to get to this very important news? Maybe he was secretly a billionaire and wanted me to fall for him and not his money, but Forbes Magazine would be running a feature in next week’s issue with his face on the cover and he needed to tell me before I found out that way? God it could be ANYTHING.

I gently picked up my now full glass of wine and starred in his face. I said nothing and waited. And waited. Have I mentioned how much I HATE waiting? It’s like the only virtue I think is totally stupid. Why wait when you could just spit the shit out NOW. I was having a full on conversation in my head as he sat there wiggling in his chair uncomfortably. Finally, after a few sips of wine, a few sips of water, making myself a piece of bread with butter and ordering my dinner he began to speak. At first he sounded like the teacher from Charlie Brown. I had gotten myself so worked up that I could barely hear anything he was saying. I tried my best to focus and bring myself back to the table and the conversation at hand. He told me about the fact that he lives with his grandfather that he takes care of and is in his late 80’s, he told me about his sons and how much work they are and how much work it is being a single parent. I was trying to contain my mouth from spitting anything out until he was done. I knew this was the build up to the big fat let down I was about to experience.

He went on to tell me about the mother of his oldest child and how they have a good but strained relationship, then he told me about how involved with his family he is and how much he works and loves his job. So far, I just wanted him to GET TO IT ALREADY! He told me about the soon to be ex-wife and how she’s treated him and how messed up his life is and how I am so put together and have gone through hell and back and my life shouldn’t get side tracked by his mess. He said he wanted me to know everything, to know the truth. That I deserved that. Then I said “Is this the lead in to what you are trying to tell me or is THIS actually what you wanted to tell me?” 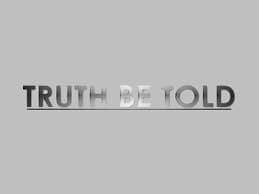 One thought on “Truth Be Told”