The next morning I got in touch with Frick to tell her “Your boy tried to break up with me last night! Nice going”  Her response was instantaneous with a BIG resounding “WHAT?”  So I began to tell her the story.  How I got the text during the day, how I had to wait hours until he was ready to talk, how he wanted to tell me all about his messy life, how I seemingly convinced him that life does not have to revolve around the mess and that we ended on a good note. She was stunned to say the least and all she kept saying was “Poor Dimples….he’s so cute.”  CUTE?  After the entire day of being on an emotional roller coaster, I did not in fact think he was so cute!  I thought that he needed a bit of help in the communication department, but such is life.  She again told me to take it slow and get to know him that he’s a “really nice guy.”  For some reason that annoyed me.  I was nice.  No one was telling him how NICE I was!  What the hell?

Two nights later he asked if we could go to another baseball game.  I agreed and he picked me up.  We headed to the game in a little more silence than we’d had in times before and I could feel there was some kind of growing tension.  So I asked about it. “You ok after the other night?”  He never just quickly answered, he seemed to take my question and let it roll around in his brain for a few minutes before he spoke.  “Yes, I’m ok, are you ok?”  In my head I wanted to say NO, NO I am not ok.  I feel weird and distant and like you threw a wrench into things and now they are different, but I knew that wasn’t his intent so I couldn’t say that.  Because to him, he was doing the right thing by laying his cards on the table and giving up the opportunity for me to run.  Although I don’t really scare all that easily and part of me was sad that even in the short time we knew each other, he didn’t know that about me.

So I said “Yes, I’m ok.  Just don’t DO that to me again!  If you need to talk to me, just talk, or wait until we are together, but don’t throw bombs and walk away until you’re ready to talk, that sucked.”  He acknowledged that he would be more mindful of that and try to be considerate of my feelings in that way which was nice.  We arrived to the game and as we walked inside there were women dressed up in island costumes with feathers on their heads and backdrops of coastline that they were standing in front of.  I had no idea this is what happened at Major League Baseball games, but hey, looked interesting.  Maybe they do these things to keep people’s attention because baseball is so boring?  I didn’t know, but of course I got myself smack in the middle of those island girls and got my picture taken.  It was fun and light and again the rest of the night went off without a hitch.

We were sitting in our seats and I was looking at my phone when I felt a sharp pain on my foot and looked up to see Dimples stretched across me, leaning with all his might and struggling a bit.  “OUCH, what are you doing?”  And with that he stood up, gathered himself together and handed me a baseball.  “Where’d you get that?” I asked.  “I just caught it.”  Wow, a real, game baseball.  He said “Do you know people come their whole lives to games and never get a ball?”  I had no idea.  “Thank you.”  At the same time over the next few minutes about 6 other people all caught balls around us.  He then says “I usually give the ball to a kid.”  As he said that I looked to my left and saw a kid eyeing my ball.  He looked at me with those sad, I want a ball eyes and then Dimples looked at me with those, you should give the ball to the kid eyes.  I looked at my ball and thought FUCK THAT, this is my ball.  God I was selfish huh?  But this was a ball caught for me right?  A memento,  a memory.  I put the ball quietly in my purse and said nothing.  As the game ended and we were leaving Dimples asked where the ball was. “I gave it to the kid.”  His eyes beamed at the thought of my generosity and he smiled and asked “You did?”  “Of course not! I’ve decided to keep your ball (s) close to me” 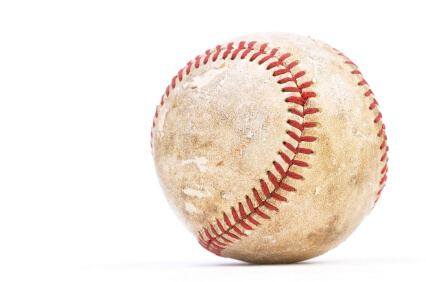