My future wife had just told me, “I’m falling in love with you but I can’t be with you” and then got in her car and drove off. Talk about a high and low in less than 30 seconds. I was working for a women’s fitness facility at the time and my next client just walked in as she pulled away. I was a wreck and I couldn’t focus. My client told me not to worry and that I should give her space. What does that even mean? How much space is space? Space is infinite as far as I know! Luckily, the night before while we were on the phone, I was able to get her address because I was helping her to locate the closest Quick Chek from her home.

After my shift ended, I made the executive decision to go after her. I couldn’t let the woman I love just slip away like that. I plugged her address into the GPS and away I went. I had no idea how it would go but my best case scenario would be something like that of any cheesy but happy ending romance movie. As I got closer, I gave her a call. My heart was pounding and I didn’t want to give it away that I was on my way to her house, where she lived with her PARENTS! Of course, women’s intuition kicked in and she asked, “Where are you?” and I said I’m right outside your house. She said, “If you are going to do this, are you ready to meet my parents?” Here’s the kicker, her dad was a retired cop of twenty years for East Orange. GULP! Usually meeting parents are my thing…they love me! I put on the Eddie Haskell charm and everything is all nicey nice. Possessing this tidbit of information made me a little unsettled but this was a do or die, cowboy up situation. I walked in the door and there was a handgun on the front table. GULP again! It was almost like he knew I was coming. Must have been the cop intuition which by the way my wife also has from her past life. Ergo, margin for error for me is close to zero.

Long story short, I met her dad and her step mom. I even passed the test of her cat, now my adopted son, Bubba, who never talks to strangers but came running to me and rubbed against my leg much to everyone’s dismay. I have learned that if I have nothing to hide and just be myself, I have no reason to be nervous. I haven’t met a parent yet that hasn’t liked me at first meeting. However, even though I may sound like the over the top, too nice boyfriend, it is sincere. I never have to worry that some other person will rear its ugly head, her parent’s first impression was spoiled and felt that I had them fooled.

Nerves are a more than acceptable part of the process because it means that the moment is important to you, as it should be. No matter if it’s the 50’s or living in 2016, parent’s approval and acceptance should be high on the priority list if your significant other is high on your priority list. Parents are not dumb and have valuable life experience to see through the BS that is being shoveled in front of them. Act accordingly and be who you are to your partner. The nerves will fade but the first impression that you leave never will.

Meeting the parents for me has never been a nerve wracking experience. I have always thought in my head that I am totally the “take home to mom” kind of girl. I’m parent friendly in a lot of ways. I grew up with both my parents still married to each other, in a religious home with values and a good moral fiber, I have a good job and pay my own way through life and I think I’m pleasing to the eye. All things I would think a mother would want for her son, apparently there is a little more that goes into it than that. Mother’s of son’s are different than any other human being on this earth. I do not understand them as a whole, but from the outside, they are the creatures you hear about who protect their young and would eat any predator that came their way. A new girlfriend is exactly THAT predator.

As a woman you think I love your son, I want to make him happy, I want nothing more than to be by his side supporting and loving him and you would think that is good enough right? But sometimes you will meet a parent that has such an attachment to their child that it is a bond that no one can touch. I never wanted to break any bonds between my significant other and their mother, however, I wasn’t trying to replace her, I was in addition to her! None the less, you are the outsider and mother’s of sons are a different breed and essentially you are the other woman now in his life. If she likes you, you have nothing to worry about, if she doesn’t you will have your hands full from the minute you meet her.

Meeting my parents on the other hand has never ever been a thought for someone to be nervous about. I know it’s natural to be nervous, but my parents are the kindest, most gracious and welcoming individuals on this earth. They instantly make you feel comfortable and at home as if you’ve always been around them. They have met lots of guys along my lifetime and they’ve welcomed them all and for that I appreciate them, but that doesn’t mean they’ve liked them all. They too have their opinions and being I’m a mid forty’s gal who has had her share of bad boys in her life, they want me to be happy, so their checklist of what’s important has grown larger. You inevitably have to be better than the rest. You have to work your hardest NOT to be like all the others because they are waiting, hoping with each breath that YOU are different. Lord knows they would really like to stop “meeting” someone for the first time. 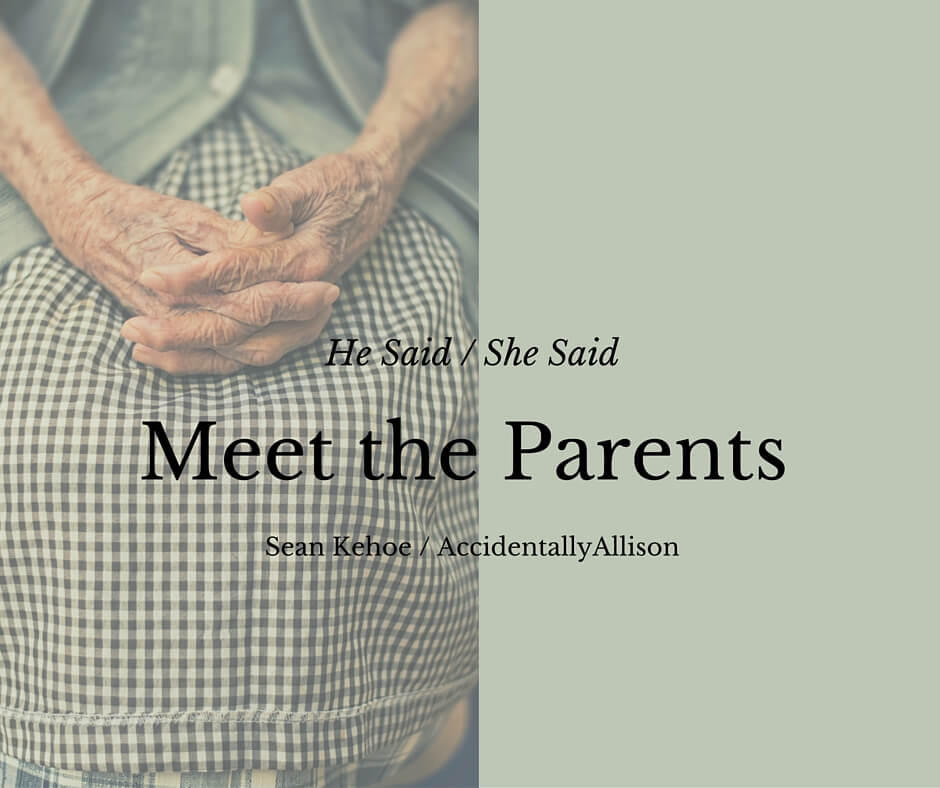