They say men are not capable of intimacy. Why do they even say that? It could be their excuse to not let others in. Perhaps a past experience lead them to make that accusation. They always seem to know what they are talking about until they don’t.

Intimacy is defined as close familiarity or friendship; closeness; a private cozy atmosphere and an intimate act, especially sexual intercourse. Generally, intimacy is derived in that very order. The man learns about his future partner, potentially igniting his pilot light. As an undetermined amount of time goes by, someone starts visiting the other’s place and becomes comfortable. The next level of comfort leads to kissing, petting or any adult level of sexual contact. But is that truly intimacy? I believe it can be.

I also believe that it becomes more intense when you really share yourself and become vulnerable. Wanting to learn about someone past the surface of their favorite color and TV show is a great step towards true intimacy. The deeper the layers that you expose to one another, the stronger the level of compatibility and most importantly, trust. Trust is the key that will unlock more doors than anything else in this world or will keep them dead bolted shut

It’s not about are men capable of intimacy but more are they able to handle the responsibilities that come along with the levels that can be achieved. Let me put this on record to say that there are plenty of women who wouldn’t know a connection of any kind if it was handcuffed to them. Along with intimacy comes emotions and emotions tend to lead to one person becoming more attached than another unless it’s a perfect match. Men are fully capable of handling emotions and feelings and definitely being intimate. However, they are only able to give to the level that they receive in return.

Can intimacy be achieved in one night, one time? I think in terms of taking your time, wanting to know every inch of a woman’s body, listening to her every moan, mirroring her every move and willingly taking her gentle direction it can be extremely intense intimacy. But to me, the deeper sense is the combination of all three definitions repeatedly is what true intimacy is all about. Openness, communication, willingness to trust and develop a bond over time is intimate. Letting someone into your mind, your heart and your soul is intimate. Inviting someone into not only your headspace but the space you call home, the space where no one judges you and you feel your safest is intimate. Sex of any kind is some of the best rewards of intimacy but the scars will not run nearly as deep as the bond that two people make when they trust each other. Intimacy should come with an instruction manual and shame on you for skipping to the last step because chances are, whatever you are building will eventually fall apart.

Intimacy takes courage, it takes trust, it takes the longing to allow yourself to be open to another person. I was once charged with a homework assignment from a therapist to build intimacy with a significant other of mine. We were to have fifteen minutes every night that was just ours, that was for building a sense of intimacy. We were to touch, caress, hold hands, stroke hair and just be; without it leading to sex. We failed miserably every night. Not saying that we ended up having sex cause we didn’t, but we, mostly him, but I’ll take some of the blame, couldn’t do it. We couldn’t sit quietly in those moments and just be together. After a week or so we actually stopped even trying. The nights got away from us, we didn’t have time, we weren’t interested and that is where I realized we would eventually fail as a couple.

Now in my later years, I realize that intimacy is the most important thing for two people to experience together. To take the time to stoke someone’s hair, to hold hands, to lay on their chest, arms wrapped around each other. To talk or not to talk, but to have that closeness, that trust building up between the two of you is something that binds you together. I can’t say that it’s any harder for men than it is for women, being I’m a woman and it’s hard for me. To let down my guard, to let someone into my space. I used to hate being touched or more specifically being hugged by a man. It made me uncomfortable, why? Cause to me, that was intimate. That was allowing myself to enjoy the closeness, the feeling I felt when someone else’s arms were around me. Almost in a needing them kind of way. Now, being with the right man and having his arms around me, is one of the things I cherish most.

Find what it is about yourself that closes you off to being intimate with the one you care about and do it anyway. Start small, start with fifteen minutes every night and have it be the time that you connect with the one you love. Don’t let it fail, don’t let it be something that you don’t have time for, make it a priority, because you are worth it and so is your relationship. 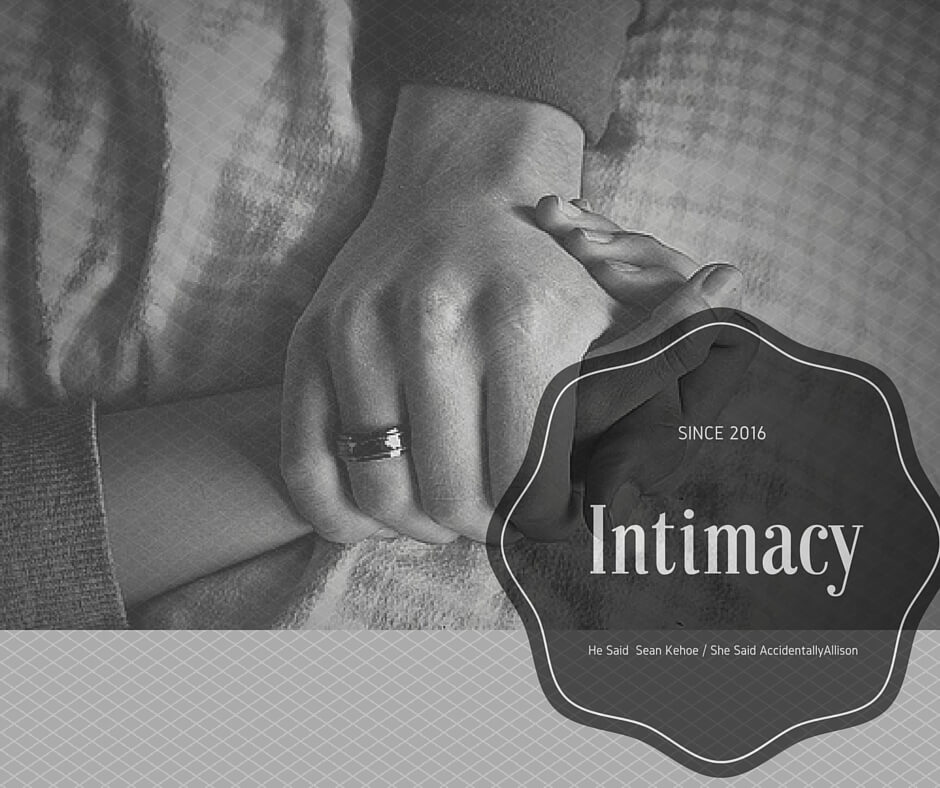