Let’s conduct an experiment. Stand up if you like to travel. Remain standing if you bring one or more suitcases with you. Remain standing if you over-pack. Good, now if you don’t care if you drag around luggage that weighs 50 pounds or more and don’t care if you pay extra, stay on your feet. Not too many of you left I imagine. Last one. Remain standing if you want to carry that baggage around most of every day with little to no assistance for weeks, months or years at a time. If any of you are left, I would be surprised. Maybe some of you think that you are strong and you can handle it. Maybe you like a challenge. I applaud you. If you aren’t picking up what I’m putting down, I’m talking about the words that no one likes to pick up, mental baggage.

At one point in my career, I was a relationship advisor for Steve and JoAnn Ward of VH-1’s Tough Love and Master Matchmakers. I listened to countless women speak for hours about their previous relationships and the patterns are all the same. Girl meets boy, boy is a jerk, girl stays, boy is even more of a jerk and girl stays begrudgingly. As one girl put it, ‘I keep putting my hand in the fire to see if it still burns, then I put the other hand in and it’s getting to the point of putting my whole body in’. Those burns can and most likely will leave you scarred for a very long time. So it begs the question…why carry or drag around someone else’s mental property when it isn’t necessary? It can become an anchor that weighs you down and sinks you into an emotional abyss.

In relationships, there are things you can tolerate and things that you shouldn’t stand for. Some people have trust issues, mommy and/or daddy issues or lack of or response to affection. Others are afraid of feeling, commitment or getting hurt. It’s not necessarily a bad thing to want to reach out and save them because most of us feel that we can fix things or people. We try to nurse the wounded ducks back to health and make them better. Admittedly, I was guilty of playing veterinarian a few times but it just left me exhausted and realizing I am not nor do I ever want to be Dr. Doolittle!

The investment must be worth the return. Have you said, if only he would do ABC, he would be perfect and I could really love him or if only she would be into DEF, our relationship would be amazing? It may not always be easy for some to leave the past where it is, especially when it left them empty, drained and bitter. It takes considerable and continuous effort for self-improvement. If there is mutual love and respect for one another’s feelings, people can rise up and grow stronger together. However, as the saying goes, “Fool me once, shame on you. Fool me twice, shame on me.” After lack of progress, you begin to realize that time spent was one-sided and wasted. You are throwing good money after bad and are officially in a losing proposition. At that point, you can either decide to SELL, SELL, SELL or continue to settle until the losses bleed you dry.

Essentially, relationships are journeys that lead us to many destinations. There are certain places you want to return to as often as possible and those that you never want to go back. If you find yourself on a round-trip vacation from hell more often than not or wish you could leave your significant other at the baggage claim, it’s time to consult a new travel agent. Maybe self-exploration and a toothbrush is the next best destination until you can easily and comfortably pack for two with plenty of room to spare for adding the good stuff!

I wrote this on February 3, 2016 and it is fitting for the idea of baggage/stuff

What’s your theory on the baggage you carry around with you every day? Let us know below! 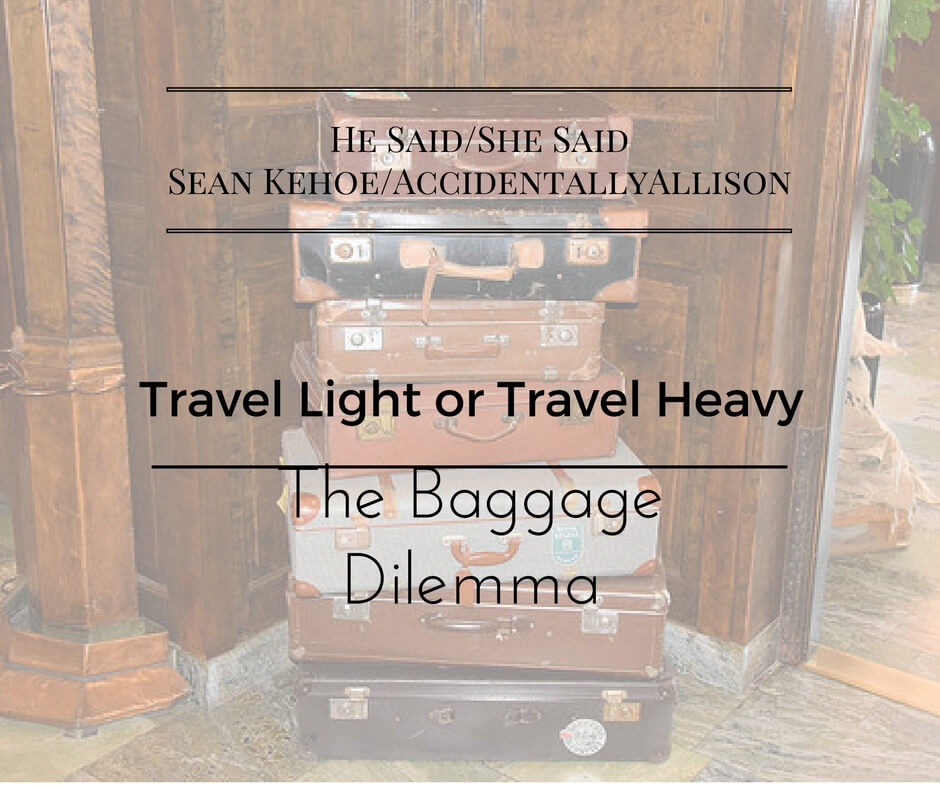